And now….Horner’s Haunted Corner brings the Asmodeus Demon to your basement.

Well, It looks like Faust has become friends with Mortimer of Lord Grimley’s Manor…..and we at Horner’s Haunted Corner could not be more thrilled. When we consider top quality masks often the names Death Studio’s or Darkside Studios come up, and they are great, but Lord Grimley’s line of exclusive designs are right up there with the best. I guess they are no longer totally exclusive because the Lord himself is letting carry their awesome masks from their awesome artists. We are proud to add their creations to our teams of scarecrows, witches, aliens and more clowns to invade your nightmares!

The Prince of Revenge, Demon of Wrath … a king under the mountain and one of the rulers of Hell seated alongside Lucifer himself. Asmodeus’ visage is transitory and elusive as is his intentions on the material plane of existence.

A trickster and keeper of the sacred books, he is often seen seeking a wager, a gambling debt, where the currency is blood and the damned souls of Hell are collateral.

Be wary .. his tongue is forked.

A comfortable elastic strap at the back of this half-mask make it ideal for a long night of haunted fun !

Vibrant colors with great detailing. This is a half mask with good fit, easy breath-ability and clear vision line. One size fits most adults. 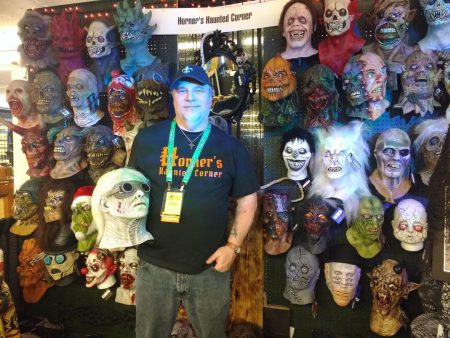